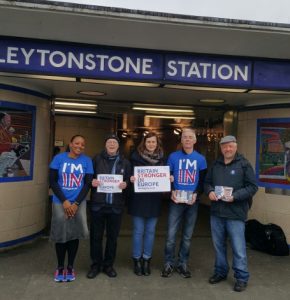 This morning, I was delighted to campaign in Leytonstone, alongside other local people, for Britain to remain a member of the European Union (EU).

I have long been pro-European. I have fond memories of trips to Italy and Germany with the Woodcraft Folk as a teenager. I then lived in Germany for a year as a au pair just before going to University. After University, my first professional experience was spending time in the European Parliament office (Brussels) of the British Member of the European Parliament (MEP) Claude Moraes. Thanks to Claude and the GMB trade union, I was then fortunate to be able to undertake a ‘stage‘ (internship) with Anna Diamantopoulou, then the EU Commissioner for Employment and Social Affairs.

It was during that stage in Brussels that I gained a real insight into the fantastic work being done by the European Commission and MEPs in the European Parliament to promote social and employment rights that British people were denied prior to the UK signing up to the EU Social Chapter in 1997. The bulk of rights British people now take for granted such as maternity and paternity leave, paid holidays, a 48 hour limit to how many hours a week we work, the European Health Insurance Card health card, tougher rules against discrimination and better protection for temporary agency workers, all originated as a result of Britain’s membership of the European Union. There is no guarantee that leaving the EU would mean that these benefits and protections would disappear, but similarly there is no guarantee that future British governments would keep them. The terrible trade union bill currently winding its way through the UK parliament is a warning as to what could happen to British people’s employment and trade union rights if Britain left the EU. At least, while Britain remains a member of the EU, British people can call on the Charter of Fundamental Rights, to support their rights to education (article 14), the protection of their personal data (article 8) and their freedom of association – i.e – their freedom to join a trade union or any membership body of their choice (article 12). 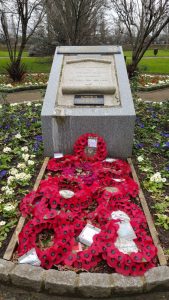 But it is not just social and employment rights guaranteed by the EU that make me a ‘remainer’ in this referendum campaign. My pro-EU position, more fundamentally, comes from a profound belief that the existence of the EU has led to over 60 years of continued and lasting peace after the horrors of World Wars One and Two, which saw millions of young men from all continents lose their lives. I also visited the Dachau concentration camp when I was 15 (with the Woodcraft Folk) and Auschwitz when I was 17 and I will never forget how physically – let alone emotionally – upset I became when I was taken into a former gas chamber. When countries and their peoples do not work with, trade with and live with each other in peace – within a legal framework of common international human rights standards – such is the risk of such horrors occurring. I am not a pacifist but I abhor war and the existence of the EU has helped to prevent war.

There are so many other topics I could mention as to why I am strongly pro European, such as freedom of movement (which I benefitted from, making lifelong friends in Spain, Germany and Belgium), excellent work to protect the environment and tackle climate change, and the economic benefits for British businesses large and small. I won’t go into all of those now, however, but what I will be doing is hitting the streets and the phones to discuss these issues in more detail with referendum voters and campaigning my heart out to convince my friends and neighbours locally to vote ‘In’ on June 23rd.

If you agree with me and would also like to make a real and practical difference to ensuring that Britain remains in the EU then please do sign up to the cross-party Britain Stronger in Europe campaign HERE.