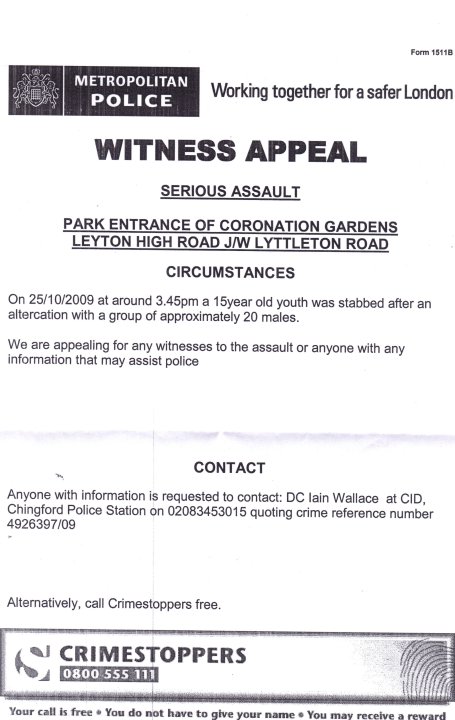 I have always rated the work done in Leyton ward by the superb Leyton Safer Neighbourhoods Police Team but I was even more impressed when over the weekend four out of the six members of the team were down my street gathering mine and my neighbours’ views, about the worrying new trend in anti-social behaviour that’s flared up in Coronation Gardens opposite my house.

On Saturday, PCSOs Azhar and Emma diligently went from door-to-door with a survey to find out how my neighbours were feeling about it all, then on Sunday night the hard-working duo were back again leafletting every house (in the rain) with the witness appeal you can see above.

Also on Sunday, I spent a really productive couple of hours helping PC Shane and PCSO Anabell with more detailed evidence they’re gathering about everything that’s been going on. I was impressed by their professional yet friendly manner and the fact that they really seem to care. Shane and Anabell told me that they’re forging some good links with the kids who hang out in the park and are slowly gaining their trust. As Shane said, “you have to give respect to get respect”.

My faith in the police declined drastically after the senseless trauma I was put through politically and personally two years ago but I am finally and slowly starting to regain confidence in some members of the police force. I am proud that Leyton ward’s safer neighbourhoods team is so fantastic.

Leyton ward is lucky to have you.