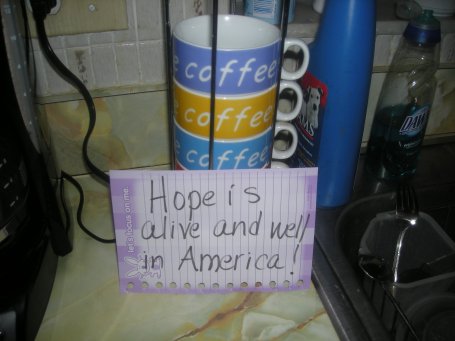 I have just spent nine incredible weeks working on the Barack Obama campaign.

After the personal and professional trauma I went through last year, it was a joy to be part of something so positive and globally life changing.

Barack Obama will never know this, but by my being able to take part in his amazing campaign, he literally saved my life. 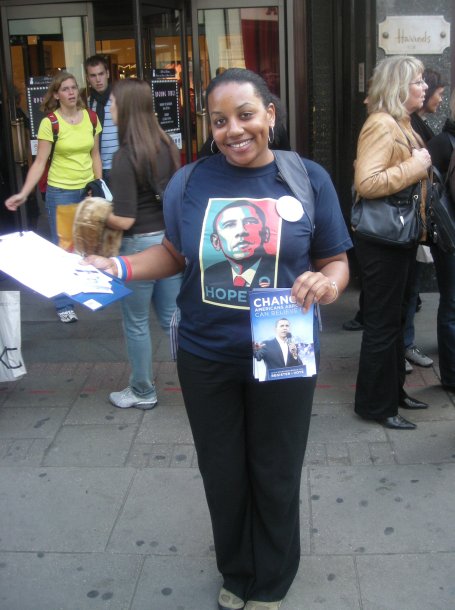 My practical involvement in the Barack Obama campaign began as soon as he was confirmed as the US Democratic Party nominee at the end of August.

From the minute that happened, it was all systems go working with the Obama London team to try and contact as many of the 5 million (I’ve been told) Americans living in the United Kingdom, to canvass them, register those who were not registered to vote, and to raise as much awareness of Barack Obama’s campaign as possible with the US Ex pat community.

I really enjoyed this phase of the campaign. As well as making tons of phone calls, I also “hit the road” helping to register US voters in universities, banks and pavements all over London.

The picture above is from a voter registration session we ran outside Harrods, in the Knightsbridge area of London. Having been expertly trained by the Obama London team, I literally ran around asking anyone I saw if they were American and, if so, attempted to register them on the spot! 🙂 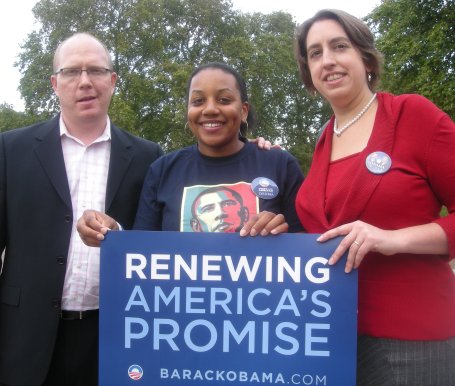 A real highlight of this phase of my involvement in the campaign was to attend a campaign really with Paul Tewes (pictured above on the left) who masterminded Barack Obama’s Iowa primary campaign back in January of this year. I remember sitting in front of the tele in Dominica (where my family’s from) during the Iowa campaign with my very excited mother and Dominican relatives barely believing Obama had won, so to meet Paul Tewes was just absolutely brilliant.

I am so grateful to Karin Robinson, the Obama campaign’s brilliant UK Director (pictured with Paul and I above) for giving me the opportunity to help. Karin’s role in mobilising the US Ex pat vote played a major role in Barack Obama’s victory. I hope Karin will be asked to carry on her excellent work in the UK now Barack Obama is about to enter the White House. She has built a formidable network of contacts and experience that I’m sure the Obama Presidency – and the next US Ambassador to Britain in particular – would find indispensable. 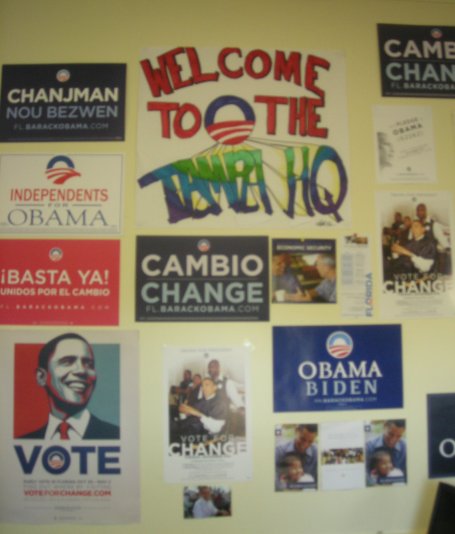 After that first phase of the UK campaign to register American voters ended in mid October, it was off to join the other 200,000 ‘out of state’ volunteers who had signed up to help the Obama campaign in Florida.

I chose to go to the Tampa area of Florida, where we were concentrating on getting out the vote in Hillsborough County, one of the USA’s top five marginal counties, then held by the Republicans. Florida – and holding the Tampa region of Florida – was critical to George W Bush’s success in his 2004 Presidential campaign, so I was keen to get out there and help canvass the many Black, young and Hispanic voters (I speak fluent Spanish) that live there and don’t normally vote. 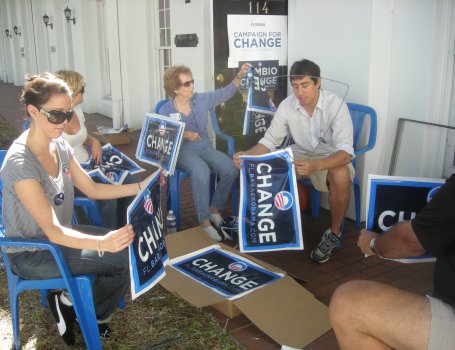 Everyone in the downtown office we were working from was “fired up and ready to go!” 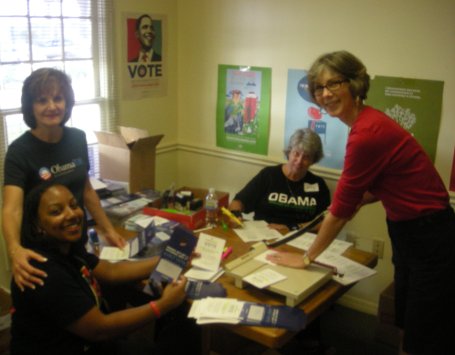 In this photo, I’m helping Cynthia, Kathy and Barbara organise “sorry you were out” signs for the non stop canvassing sessions that were taking place. 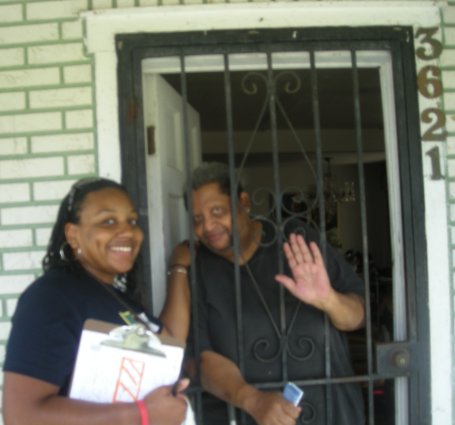 I really enjoyed getting back into the swing of things and knocking on some doors myself.

It was a real pleasure to meet College Hill (a poor mostly Black area of Tampa) resident Raymond (pictured with me above), a highly educated Master’s Degree graduate who had unfortunately become sick with arthritis sixteen years ago and has not been able to work since.

Not only could Raymond not work because of the chronic daily pain he suffers but, on top of that, he is forced to worry about the disgraceful cost of his medication and treatment and the fact that he has his social security (unemployment benefit) is taxed. Despite his predicament, Raymond is one of the most positive people I’ve ever met. He laughed and joked about how it was “all Nancy Regan’s fault”.

Apparently, when she was told that poorer Americans could not afford to buy fruit and veg based on the low value of the food stamps they received, Nancy Reagan replied, “well they should eat ketchup, that’s a vegetable”. I think that says it all about why the Republicans lost in poorer areas of Florida such as College Hill and Hillsborough County. 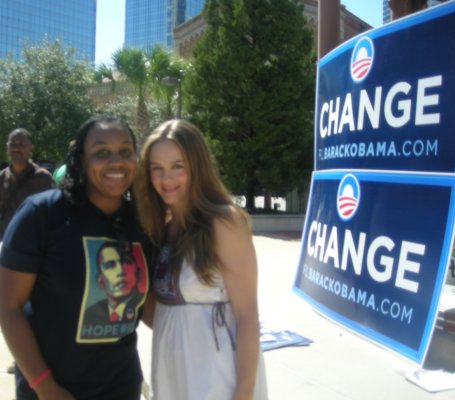 I missed hilarious comedian Chris Rock because I was doing something else but apparently he was very, very funny. 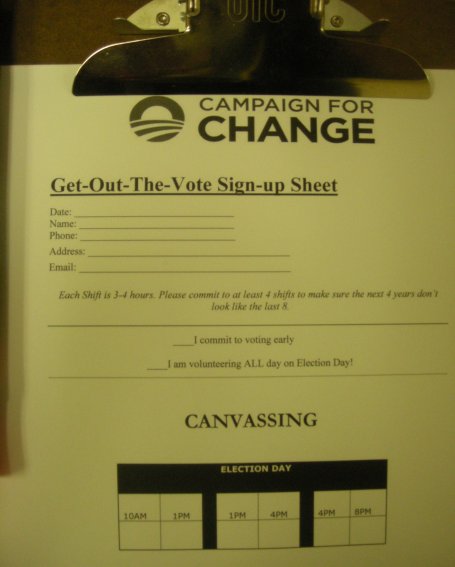 As we approached election day, it was all go in the office. The energy of the campaign was incredible, with new volunteers joining every day. We were even requested to try and sign up any residents we canvassed to become volunteers – unheard of in UK campaigning terms! 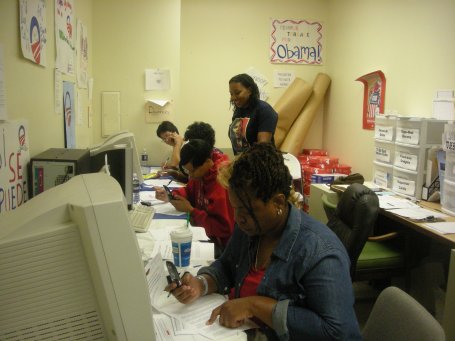 I was asked to manage the office’s phone bank for the last three days of the campaign. I had about ten-fifteen people to manage at any one moment, with a turnover of about thirty daily phone bank volunteers. The pace was hectic, fast and exhausting but I enjoyed every single minute. My “team” of phone bankers were absolutely brilliant. I didn’t have time to keep count of how many potential voters we persuaded to go out and vote but, I think it’s safe to say that the phone calls made, helped the Tampa ‘Get Out The Vote’ campaign considerably. 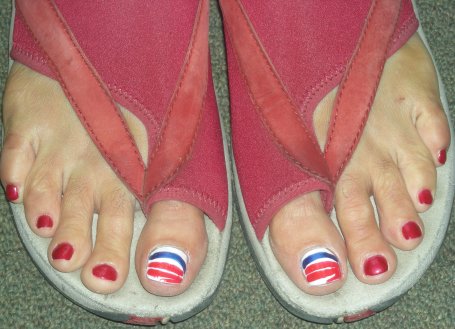 After the polls closed at 7pm Eastern Time and we spent another two hours calling voters in New Mexico (where they still had two more hours to vote) it was then onto the election night party to wait for the results. Cynthia, a hardcore Obama fan, had even painted her toe nails in the style of the Obama campaign logo for the occasion!!!! 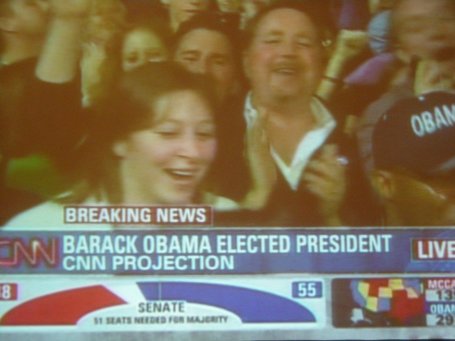 There was absolute euphoria when CNN’s projection of an Obama victory flashed up across the screen!!! 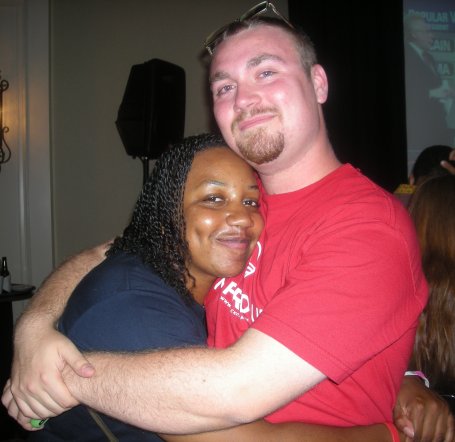 Major credit for the Florida victory must go to Julien Greboval, my “boss” during my time in the States. Julien, one of six field organisers (or “Agents” in UK election speak), based at the downtown Tampa office, managed the campaign that took Hillsborough County, which ALL the pundits in the post election analysis are crediting with the reason for Obama taking the whole of Florida state. Julien (pictured with me above) was absolutely lovely. I’m meant to be “detoxing” at the moment (!) but, as you can see from this photo, the announcement of Obama’s victory knocked that idea right on the head 🙂 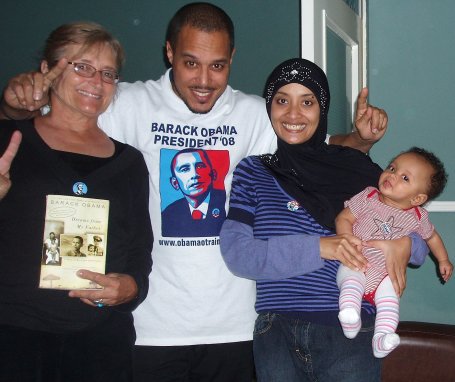 But the amazing time I had out in Florida wasn’t all done to the politics and the campaigning. It was also really lovely to spend time with June Young (pictured above left with her son Roy, his wife Mita, and their gorgeous baby Ayana), a family friend of over twenty five years who moved to Florida and was one of my co-hosts.

June is white English with three mixed race sons, whose father was Jamaican. One of them, Roy, (pictured above) is married to Mita, a Muslim woman from Indonesia, (pictured next to Roy above) and they now have a gorgeous quarter English, quarter Jamaican, half Indonesian baby called Ayana who, judging by this photo, was absolutely thrilled at Barack Obama’s victory 🙂

June’s family is the living symbol of tolerance and the celebration of “unity” between different cultures.

June, my dear, it was so amazing to “connect” with you again 🙂 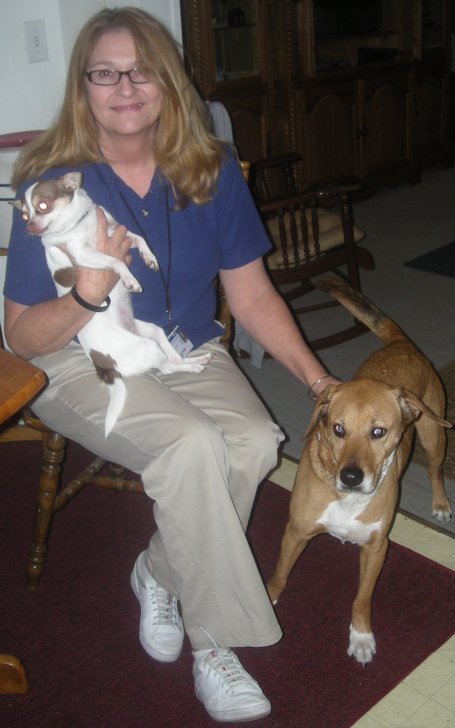 A special thank you also to Jan, my “room mate” and fabulous other co-host for my stay in Tampa. Jan and her gorgeous dogs Deela (pictured above left) and Java (pictured above right) made me feel right at home. 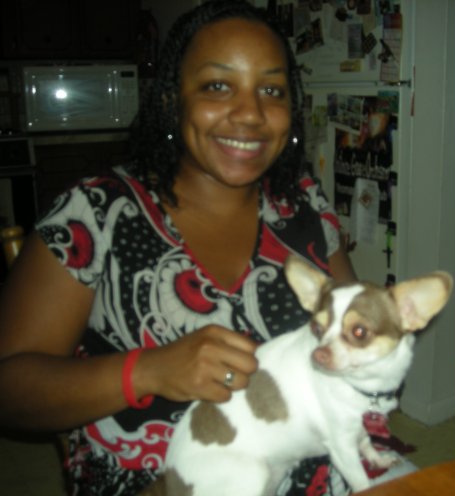 In fact, so gorgeous was little Deela, I was GUTTED I couldn’t bring her back to London with me! Everyone’s speculating about the puppy Michelle and Barack Obama should buy for their adorable daughters, Malia and Sasha. Girls, I would recommend the adorable little Deela any time! 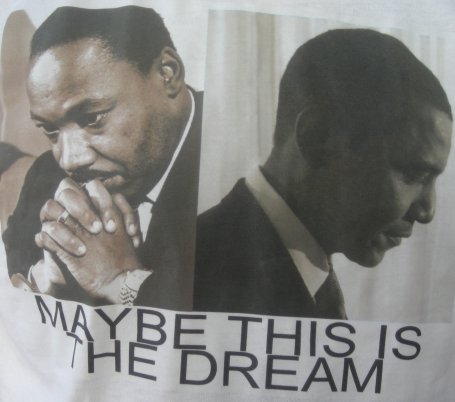 Throughout certain times in my life, I have felt so too and this was one of them. Despite everything negative that’s happened to me over the last year, being part of this campaign, both in the UK and the US, surrounded by some of the most loving, giving and politically aware people I have ever met, will be an experience I will treasure forever, and it is with some irony that I know that – had I not been put through such awful experiences last year – I would never have ended up being able to work on the Barack Obama campaign.

So, yes, I feel Blessed again.

And it’s all down to Barack Obama.