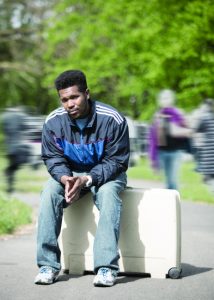 Congratulations to everyone at the West Yorkshire Playhouse for producing the brilliant ‘Nine Lives’ play, which I attended at Dalston’s Arcola Theatre last night, in order to support the work of the UK Lesbian & Gay Immigration Group (UKLGIG). Formidable Hackney Community Law Centre trustee Paul Dillane is UKLGIG’s Director.

Nine Lives focuses on the story of Ismail, a young gay man from Zimbabwe who fled the country after being persecuted because of his sexuality.

Arriving in the UK, Ismail is forced to navigate the oppressive, inhumane and bureaucratic UK immigration system, all while trying to adapt to his new surroundings and battle the deep loneliness he feels – especially as he feels forced to hide his sexuality from other asylum seekers with whom he comes into contact.

Actor Lladel Bryant does an amazing job at authentically portraying the terrible battle asylum seekers of Lesbian, Gay, Bisexual and Transgender (LGBT) backgrounds face when arriving in the UK. They are almost always disbelieved by the Home Office, questioned about intimate details of their private lives and often tormented in public – at places like local supermarkets – by unsympathetic and xenophobic Brits.

It is wonderful that the Arcola Theatre decided to donate all the takings from last night’s performance of Nine Lives to UKGLIG.

Not only that, but Sir Ian McKellen also attended the performance to support the charity! 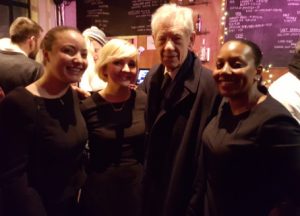 My two lawyer friends – criminal barrister Merry Van Woodenberg and pupil barrister Mary-Rachel McCabe – and I managed to get a photo with Sir Ian. To say we were star-struck was an understatement!

Nine Lives is showing at the Arcola Theatre until the 30th of January 2016. Don’t miss the opportunity to see it. Booking info HERE.