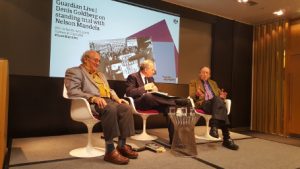 The event was held for Guardian newspaper members, as the men are in London to receive the freedom of the City of London from UK Prime Minister David Cameron.

I have long taken a close interest in the South African anti-apartheid movement. My political awakening came as a 6 year old accompanying my mum to anti-apartheid demonstrations and (sometimes, when she was tired) reminding her that we were not supposed to buy South African fruit when we went shopping.

When I was 11, we then spent the summer with some South African anti-apartheid activists and writer friends of my mum who were in exile in the UK. It was a hugely exciting time. Nelson Mandela, and other ANC members with which he was jailed, were due to be released in the coming months. (I would write about the day when Nelson Mandela actually called the house and I spoke to him on the phone but people don’t believe me!)

Many years after Nelson Mandela had been released from prison, on my 30th birthday, I celebrated my life milestone by attending his 90th birthday concert in Hyde Park. I couldn’t have wished for a better birthday.

The South African anti-apartheid campaigners (along with Gandhi) have shaped my core political beliefs from childhood, to adolescence, to adulthood, and so it was a deep honour to be in the physical presence of Denis Goldberg and Joel Joffe last night.

I am so proud that Britain is finally officially recognising the immeasurable contribution that the anti-apartheid campaigners made towards creating a better world, by granting them the freedom of the City of London.

We must continue to listen to the anti-apartheid campaigners, read their books, visit the museums dedicated to them and live our lives in the peace, equality and the freedom that they fought so hard for.

I salute these South African Survivors.